This award is given in recognition of a student who has demonstrated interest in reproductive health and who has an understanding of the role of family planning in women’s development in third world countries. The Award and $1,000 prize is presented annually by The National Council of Women at its Australia Day Luncheon at Parliament House, Sydney. Applications for 2020 open on July 5th and close on September 27th, and should include a 200 to 300 word account of the student’s academic record and an account of demonstrated interest in reproductive health and family planning as a component of women’s development in developing countries. Applicants may also include a resume, outlining relevant professional experience, volunteer work or special need. Applications should be submitted electronically, as a Word doc or pdf to contact@womensplans.org.

Opportunities exist to volunteer to be part of the WPF team to assist us in extending our capacity to provide family planning as an integral part of overseas aid. 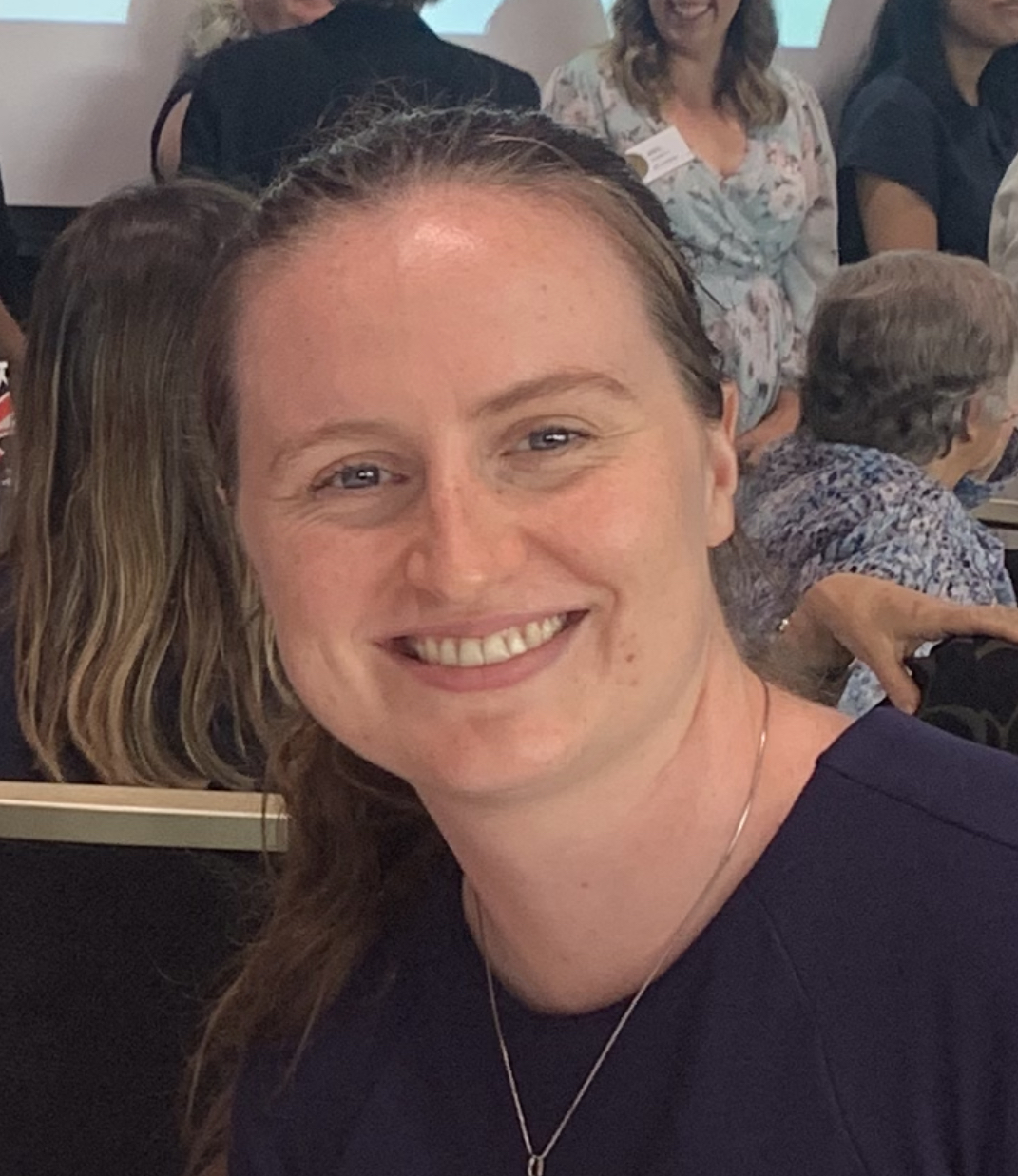 The Awardee for this year's National Council of Women's Australia Day Award was presented to Jessica Gemmell. Jessica is a student in the Master of Nursing program. She completed a Bachelor of Science (Psychology) from Macquarie University in 2018. She has performed consistently well throughout her tertiary studies. Jessica is deeply passionate about women's health, a passion borne from strong concern fos social justice and equality in health care opportunities and in wider society. She feels that reproductive health continues to be a difficult experience for women in Australia. This conviction is further reinforced by her practical experience. She currently works at a private reproductive health clinic in Sydney's Inner City. In this role, as a medical receptionist and nursing assistant, Jessica interacts with a diverse cross-section of the population and assists them to access reproductive health services. She has become familiar with the lack of reproductive resources and services available to women, particularly women who also experience intersecting disadvantage, such as systemic racism, disability, financial instability, chronic disease, or homelessness.
‍
Her ultimate aspiration is to be an advocate in the health care system for women whose health care is poorly managed, funded and researched and to her diverse education and experience to inform policy, improve services, allocate funding to areas of need, and change the structural systems and attitudes which disenfranchise and disadvantage women. Jessica's career aspirations include policy - making roles in women's health both domestically and internationally; undertaking a Doctor of Philosophy in women's health; teaching; and finally, engaging in hands - on aid-work supporting women's health globally. Her current career goal is to work as a Clinical Nurse Specialist in Early Pregnancy Care.
‍
Jessica believes that Women's Plans Foundation's goals absolutely align with her own in our desire for global female equality, and for women across the world to have access to safe, reliable family planning.. 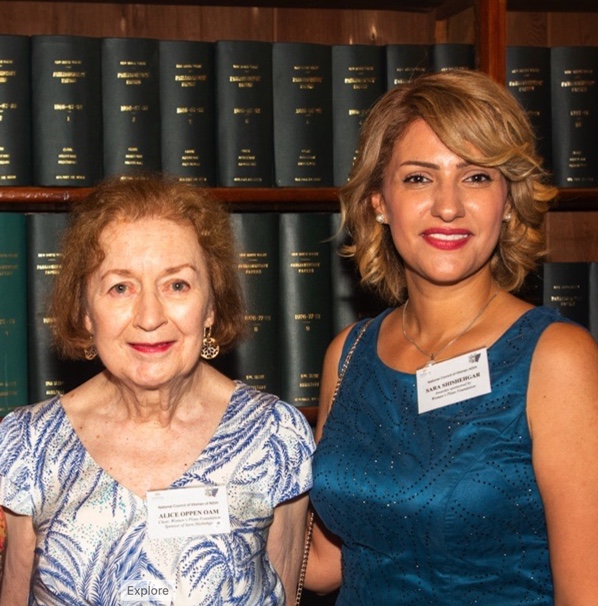 The Women’s Plans Foundation Award this year was presented to Sara Shishehgar. Sara qualified as a midwife in Iran and worked in highly demanding health card situations with Afghan immigrants and Iranian families of low socio-economic status. Both groups were deprived of health and education literacy, and cultural barriers preventing talking about sex. After coming to Australia, Sara conducted PhD research in asylum seeker women's health at the University of Technology, Sydney. In 2020 Sara will complete a Master of Nursing degree at the University of Sydney's School of Nursing. We wish her well and will follow her progress with great hope. 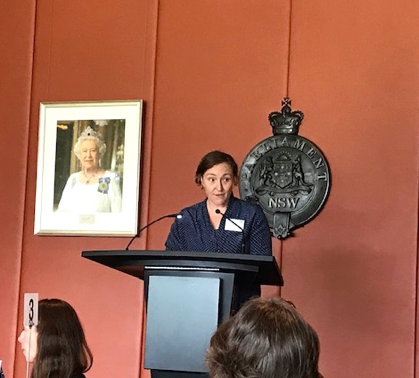 At the National Council of Women’s Australia Day Awards lunch at Parliament House on January 24th, the Women’s Plans Foundation Award was presented to Jay Court, now entering her second year of the Master of Nursing course in the School of Nursing at the University of Sydney.  The Dean of the School of Nursing, Professor Donna Waters, was present to celebrate the occasion.

Jay Court has chosen the nursing profession after seeing great need in her volunteer work in Kenya.  After a degree in film and television production and an impressive career creating programs for domestic and international broadcast for The Smithsonian Channel, ARTE France, National Geographic and the ABC, Jay is becoming a nurse because she believes that nurses can play a crucial role in improving women’s reproductive rights around the world.

This combination of careers has the potential to bring nursing’s contribution into significant planning roles.

A placement with a remote Aboriginal Medical Service, including work with implants, has increased her enthusiasm for the difference nursing can make. Jay is completing a summer scholarship program with Associate Professor Julie Leask, Sydney Nursing School, Faculty of Medicine and Health. The project is investigating media representations of parents who choose not to immunise their children.

WPF has asked Jay to speak at an event this year, so that many may appreciate her articulate knowledge, inspiration and advocacy. 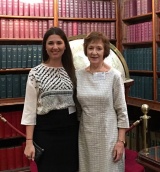 Lena writes: "Having grown up in Indonesia, Australia and Germany, I have always had a passion for other cultures and countries, especially in the developing world. As a result, my upbringing has driven my aspiration to combine both of my degrees and work as a nurse in low-income countries.I currently work for Médecins Sans Frontières Australia (Doctors Without Borders), which has further intensified my aspiration to work in this particular field, as it has opened my eyes to current international issues, especially pertaining to women’s and children’s health all around the world. 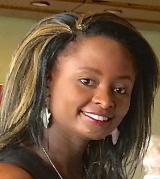 Sandra writes, “While volunteering in Kenya with Furaha Feet Foundation, an organisation that reaches out to underprivileged children, I saw the importance of family planning. Most of these children did not have their basic needs met. It was evident that they came from big families and their parents were torn between buying shoes and clothes for them and feeding them. For most families this meant feeding a family of four or five children on a minimum wage or none at all. It is no doubt the important role of women in the society and especially in the third world countries where their roles remain as supporters of their families through wage labor, they ensure household food security and nutrition and also preserve traditional knowledge that ensures preservation of the community’s heritage and history while maintaining biodiversity. It is therefore important to support women to ensure that they effectively manage their roles. The number one way this is achievable is to educate the women on the importance of family planning and supporting them with the necessary tools and access to preferred contraceptive method.” Sandra spoke at the winter Symposium. 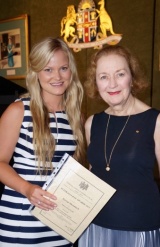 The 2016 Award was presented to Georgi Sheumack, a final year midwifery student at UTS. Georgi has been a volunteer in Indonesia, and writes that she “has become interested in the complex cultural and legal barriers that Indonesian women face in accessing and choosing family planning health services.” She has seen the results of unintended pregnancies – sometimes children put in orphanages because their parents cannot afford to care for them.WPF continued its support of the School of Nursing, University of Sydney, awarding a scholarship to Annika Schryver. Annika spent four months as a volunteer in Rwanda, and writes, “Through my work at the clinic I was able to see the huge importance and value of sexual health education, awareness of and access to contraceptive options…. imperative in the empowerment of women within the community. With a population of nearly 12 million people and one of the highest average annual population growth rates in the region, family planning education is absolutely critical to the success and sustainability of the Rwandan population and economy.”

The 2015 Award was presented to Souti Khalil on January 23rd at the National Council of Women’s Australia Day luncheon. Souti has a Bachelor of Medical Science and was then in the first year of her Master of Nursing degree at the School of Nursing, University of Sydney. Souti has been a volunteer in Kenya, which “increased my passion to reach out and teach women that they have the ability to plan the number and spacing of their children and take ownership of their reproductive health…. I saw the lack of family planning and the critical effect it had…. What really broke my heart was seeing the woman’s blank expression as she entered the delivery room and the blank expression which remained after leaving with her baby. Another unwanted baby is born.” 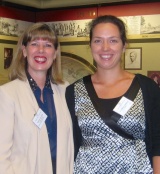 The 2014 Award was presented to Kathleen Foster, Master of Nursing Student at the University of Sydney. Kathleen saw firsthand the effects of nonexistent family planning in Kenya, many of the women having their fourth or fifth child before age 25. Kathleen wrote, “Education about family planning in Kenya is well below the levels seen in developed nations. By teaching women that they have the ability to plan the number and spacing of their children and take ownership of their reproductive health, we not only improve maternal health but also decrease child mortality rates as well.”

The 2012 Award was presented to Jacqueline Goss, completing a Masters of Public Health/Health Management at NSW, majoring in International Health with Reproductive, Maternal and Child Health, earning the Family Planning Australia Certificate. Jacqueline wrote that her study “is not only fascinating but has also confirmed my interest in maternal mortality, fertility regulation, gender equality and the role of global agencies in reproductive health.”

The 2011 Award was presented to Karina Sijabat, completing a B. Arts majoring in Government & International Relations concurrently with a M Nursing. We wish her well in her studies and her ambitions to meet the issues “surrounding poverty, large families and low access to healthcare”. Karina sees nursing as a practical and effective means of becoming involved.

Women’s Plans Foundation received the Philanthropy Award 2013 from Save the Children Australia in Melbourne on 25 May 2013. 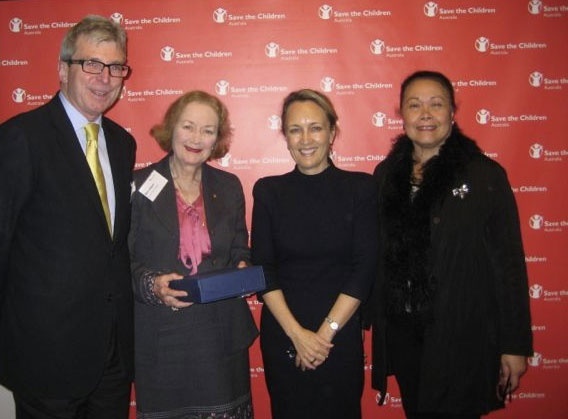 “The Women’s Plans Foundation has been supporting our work in Laos since 2007. In 2012 the Foundation continued their support of our family planning activities for women in northern rural Laos, helping us provide contraception and family planning advice to more than 10,000 women. Family planning is a key part of the services provided by our child and maternal health care clinics in northern Laos. At the clinics, women can access contraceptives, as well as information about the healthy spacing of pregnancies and the benefits to girls and their community of delaying pregnancy until after they have completed their education.”